skip to main | skip to sidebar

Ok, so once again I'll admit, I am horrible at keeping this up. I think after the kids are in bed, it's either Facebook, which most of you see our daily lives in pictures by, or watching 20 minutes of TV while doing some laundry. I take for granted that most are seeing us on Facebook, then I am reminded by some other people....ehheh, my inlaws....that not all people are on Facebook. :-) SO....I will try once again to get better at this!

Where to start....well, this school year is half over, and Kinsey is in Kindergarten, Madison in 2nd grade, and Baylee in 4th. Wow, how did that happen? Just yesterday Baylee was learning to walk, talk, and constantly telling us...."Jay Wonka Jay, Circle round," which I remind her often. For those of you who are lost, my little Baylee, I was convinced was going to be an actress, had SO much to say and when it wouldn't come out the way she needed it to, this phrase was repeatedly told to us. We have no idea where it came from, but her Poppa wrote her a book about Jay Wonka, and we still read it often! And....as soon as it came, it was gone again, and these little things often make me smile as I think back and recap the memories. Madison and her pacifier, which was her BEST friend, and the night before Kinsey was born how I rocked my 14 month old crying because that would be the last night she'd be the "baby," and how incredibly guilty that made me feel. Then on to my Kinsey, who got an extra year with me at home because of how her birthday fell, and how extremely hard it was to send her to Kindergarten this year! I never thought the 3rd would be so bad, especially since I had yet one more at home with me, but this one really caught me off guard.

Let me recap this event, as I'm trying to catch you all up in our recent lives. Kinsey wasn't especially excited as her sisters were to start school. She was fine with 2 day a week preschool and being at home with me and Britton! As the days neared, I kept asking her fun things she'd like to do for her "last day" before school started. Apparently, I might have stressed that "last day" a little too much, and the night before her first full day, tears welled up and she let me know she really didn't want to go all day every day. It was then my flood gates opened as soon as I left her room! I was an emotional wreck. She was just my little shadow, and I had her all to herself, then with Britton after Madison went to school. Now, don't get me wrong, there were tears for all of them, but for some reason this one was the hardest! Later that night, Britton woke up crying, and the words "mommy, mommy" rang thru at around 2am. When I went to pick him up, all tears stopped as Mommy had come and made it all better, and then yes once again, even at 2am, my floodgates opened and thoughts of Kinsey and how she was once this small and all she needed was me to hold her, came to mind. I rocked him a lot longer than I needed to, sobbing, and thinking I might not get through this. Where did the time go...?

She made it through those first few days....not without tears at school for her mommy she missed, and not without more tears from me, but we survived. She loves school now, and always asks me on days off what they would be doing if she were at school. Then we blinked, and it's Christmas! Half a school year gone by once again, and time not slowing down at all. Tomorrow is Christmas Eve, and much excitement is in our house, as I was woken this morning to little ones telling me it was Christmas Eve Eve. Ah, to be a child again....but then I'd miss out on these wonderful years of being a Mommy!!


Their first day of school.... 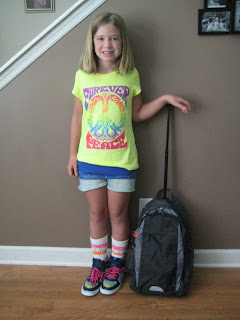 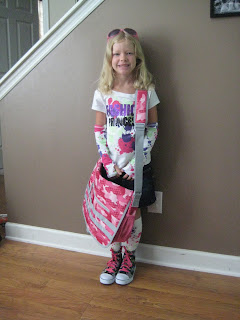 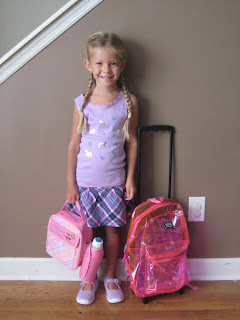 Brooke
I have been married to Seth for 9 years. We met in Knoxville while I was in school at UTK. Seth is from Pittsburg, but I married him in spite... ;-). We have three daughers, Baylee, Madison, and Kinsey, and one son, Britton. Needless to say there isn't much down time, and usually any time I have 20 minutes to sit down, they are spent nodding off! I began this page as a way to remember the cute daily stories and events of our life. I started a journal for each of the girls several years ago, but since the baby, I have found it more and more difficult to find time to write in each one. This way, at least it's recorded and I can go back later and fill in the journal entries!